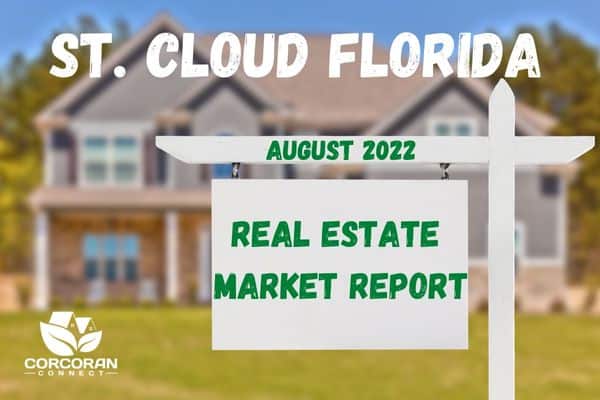 Jeanine is the broker for Corcoran Connect. Her co-host Kristin Macari who owns Studio Nine 13 joins Jeanine as they discuss the real estate market in Saint Cloud Florida. Welcome to the 33rd episode of Discover St. Cloud Florida.

Kristin opened by asking Jeanine what happened in the Saint Cloud real estate market in August 2000. Jeanine replied that they always like to report with separate zip codes, so she started with 34769. There was a total of 41 single-family homes sold in August. Thirty-four of those properties sold were one-story homes and 7 were two-story homes.

Jeanine said that right now buyers are taking their time and several contracts had fallen through which never happens. Kristin closed out zip code 34769 by stating that the price per square foot average is down 1.3% and up 19.6% year over year through August.

Kristin stated that out of the 103 homes sold in August only 35 of those were resales the balance was new construction.  Zip code 34771 still a hot happening zip code in Saint Cloud FL.

Kristin stated that the $226 average price per square foot in zip code 34772 is up year over year by 36.8%. When you compare August to July 2022, there was a 3.5% decrease. She said the inventory was roughly the same metric as last month coming in at 2.4 months’ supply. The days to contract was 18 whereas in July it was 23. The average days to closing is 54 whereas in comparison in August of 2021 this number was 67 days to closing.

Kristin then reported on home sales specific to Harmony Florida. There were 12 homes sold in Harmony main and the average price per square foot was $184.26 which includes the townhouses, condos, single-family homes, and customer homes.

Enclave At Harmony FL Had Five Homes Sold In August 2022

Jeanine commented that if you want to know what your home is worth, call your realtor. They will do an accurate job of comparing comps and arriving at an accurate value for your home.

Kristin said we only use price per square foot for comparison. Jeanine said she only uses it because the public wants it. Kristin then said she feels like it is a decent broad stroke barometer of the market. It is a safe indicator to have your finger somewhat on the pulse. It is not detailed data.

The last segment to report on is vacant land sales. Jeanine said there were 8 parcels of land sold in August. The lowest-priced parcel was on Crazy Court for $25K which consisted of 1.25 acres. The highest-priced parcel was on Narcoossee Rd for about $1M and consisted of 11 acres. The key aspect of this one is a subdivision could be built on it. All of the parcels sold in August were cash sales.

Jeanine and Kristin started talking about the market sentiment. Jeanine mentioned that some people view what is happening in the market now as negative and that they should have sold their home in the Spring. She reminded people that they haven’t lost that equity, it is still there. It may take longer for your home to sell and maybe you won’t have multiple offers, but your home is still going to sell.

Jeanine added that interest rates in 2019 were in the 5’s. Everyone has a short memory.  Both Kristin and Jeanine mentioned that builders are buying down rates in certain instances and closing costs are back on the table. Kristin said there are fewer buyers in the market and Jeanine said there is more opportunity.

Kristin said that the biggest difference in the market is home sellers are not receiving those 30-40 offers when their homes hit the market. Jeanine emphasized that this is the reason you need to call a qualified realtor as they can help you compare apples to apples.

We hope you enjoyed Jeanine and Kristin walking you through the Saint Cloud FL real estate market report for August 2022. Our goal is to keep you in the know about the housing market and statistics here in Saint Cloud, FL.