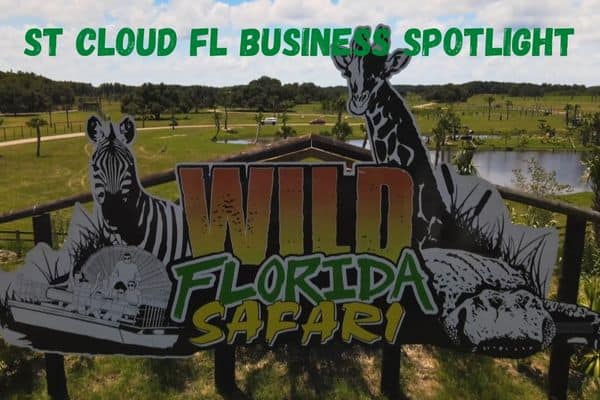 Jeanine Corcoran broker for Corcoran Connect interviews Sam in this month’s episode. Welcome to the 30th episode of Discover St. Cloud Florida. Kristin asked Jeanine to describe her experience with Sam Haught with Wild Florida. Jeanine said did you know they have been in business for 13 years?

Kristin said she didn’t realize that. She also loved the fact that what Sam went through is a “rags to riches” type of story that was born out of hardship.

Jeanine stated that Wild Florida is so close to where she lives yet it is in Kenansville. It is literally right across the line from Saint Cloud. Kristin added how great it is to be able to go to a wild animal park in Florida and enjoy the sights from the comfort of your own vehicle with the air conditioning on during the summer.

Wild Florida Safari Drive Thru Park is located at 3301 Lake Cypress Rd Kenansville, FL 34739. Kristin shared their website address which is WildFloridaAirBoats.com. They have so much to offer families, especially kids. Here is the interview with Sam Haught from Wild Florida.

Jeanine’s first question of Sam was how long has Wild Florida been in business? Sam replied that they have been in business for 13 years and he couldn’t believe it has been that long. Jeanine followed up and asked him why he decided to do this business. Sam said that it started with real estate.

Sam continued and said that they started dreaming up these ideas to do with attraction and started with a dude ranch. He said it was born out of their love for the outdoors. Whenever we have people come into town, they would take them out on the airboats and have some fun. They knew that this was where their heart and passion were and wanted to build on it.

Jeanine asked Sam if it was the airboats that started everything that is now called Wild Florida. Sam said yes, the airboats started everything. Jeanine then followed up and asked what came next. Sam said they bought the property. It was 15 acres, and it had an airboat operator on it when we first bought the fish camp. We continued to let him operate the airboats for a couple of years until we were ready and then we took that over. Then, he said, eventually the park over time developed into what it is today.

Jeanine asked Sam if he was a resident of St. Cloud and he answered that he was. He lives on Lake Lizzie and loves it. Sam said he loves everything about Saint Cloud. He continued that Osceola County is where they wanted to start their business. He said they looked all over Central Florida and decided on this area for their airboat business as it doesn’t get any prettier than this.

For people out there who don’t know who Sam Haught is can you tell us about yourself Jeanine asked. Sam said he was born in Arizona and went to school in Utah and started working for a big company called Goldman Sachs and then met his wife who was originally from St. Cloud Florida. What Sam learned from his wife was that “southern girls go home”. About six months after Sam and his wife were married, they came back out to Saint Cloud.

Wild Florida’s Largest Attraction Is The Drive Thru Safari

Sam said he then quit his job with Goldman Sachs when they moved to Central Florida and started working with his wife’s family and doing real estate development. They developed Lizzie Reserve and Nova Bay and other properties and then eventually landed on the land that is currently Wild Florida.

Sam said that it has been a wild ride but, in the process, he now has 5 kids. He said they grade every grade level in Osceola County schools. He continued that if they have an open weekend, that they are on the water somewhere. Whether it be scalping, fishing, lobstering, spearfishing, or hunting, we are all about it.

Jeanine asked Sam out of the different pieces that make up Wild Florida, which one has the larger audience. Sam replied that it is the Drive Thru Safari. He says it is the easiest adventure you will ever go on. Sam said that he would say it is the most comfortable outdoor adventure you could go on in Central Florida. He is not aware of any other outdoor park that you can enjoy from your climate-controlled air-conditioned car.

Sam said that their airboats are limited by the number of people they can take on a 17-passenger boat on a schedule and having to deal with the weather. It’s really complicated. He said the people we have in our store running the airboat rides are scientists.

Sam said on a typical Saturday in the Drive Thru Safari they will have 2,000 vehicles come through. In comparison, there will be 500 people doing the airboat rides. Jeanine said her grandson likes standing up in her SUV through the sunroof so he can see all the animals. She said feeding the giraffes is one of her favorites. Sam said he loves seeing herds of animals like the Wildebeest as opposed to a single animal in a cage somewhere.

Jeanine then asked Sam to share why someone should consider moving to Saint Cloud Florida. Sam replied that it still has that small-town feeling. It is starting to get more developed, but it is maintaining the small-town character. He said it still feels like a small town and you know the people as you're driving down the road.

It also has beautiful Florida landscaping everywhere you look along with the Lakes and the Waterways he said. It also has the undiscovered crown jewel of Central Florida in the Alligator Chain of Lakes. Sam loves how accessible the outdoors is here in Saint Cloud. Also, he added that people don’t realize that the Everglades start here. It is in our own backyard. People think you have to drive down to Ft. Lauderdale or Miami to experience that, but it is right here.

Jeanine asked Sam what one place he would recommend for a first-time visitor of course aside from Wild Florida. Sam said The Catfish Place. He said it is his favorite spot whenever people come to town.

We hope you enjoyed Jeanine interviewing Sam Haught of Wild Florida Safari Drive Thru Park as our featured St. Cloud FL business spotlight. This will continue to be a monthly focus for the Discover St. Cloud Florida podcast.