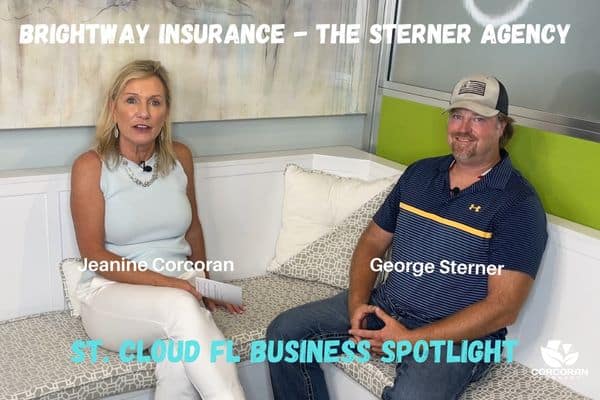 Jeanine sat down with George in her office and had a great time interviewing him. Jeanine’s first question to George was how long has he owned his business, Brightway Insurance? George replied that he has been in business for 14 years in St. Cloud. He continued that he has seen some definite market changes, but he is happy to be where he is at.

Back in 2008 when the market started to crash, George’s stepdad said he said look at insurance as it is a recession-proof industry. George’s stepdad found an insurance agency called Brightway that had just started up. When George took it over, Brightway Insurance was #25 and now they are the largest private brokerage firm in the US.

Brightway Insurance Is The Largest Private Brokerage Firm In The US

Jeanine then asked George to tell the audience a little bit about himself. He said that he is a family man first, he is a businessperson and is involved heavily in the community of St. Cloud. He loves the outdoors and enjoys hunting and fishing. George stated he spends a lot of time with his family and friends.

Jeanine then asked George if there was a top product at Brightway Insurance? He said that was a good question because insurance is a very broad spectrum. George said his bread and butter was home insurance. He said he can compete with anyone in the market in home insurance. His claim to fame is he has every home insurance company that is writing business in the state.

Jeanine followed up and asked how many home insurance companies are there? George said there have been as many as 57-60 at any given time but now there are fewer companies as the market has changed. Jeanine asked why these companies go out of business. He answered that people find loopholes in the policy and find ways to make claims where they can get money.

There were so many people making these claims that the state had to step in and make a statute to prevent this, so it didn’t kill the insurance industry.

George then said fast forward to today with the roofing situation. He said the roofing loophole has put them in this horrible situation they are in now. Jeanine commented and said she saw this coming with the roofers going door to door, she knew insurance rates were going to go up.

George used to be able to say to people that he had 57 home insurance companies that want to write your home. Now, if your home has aged just a little bit, I now say I’m one of the only companies that have Citizens which used to be a dirty word. Citizens is our state-run insurance company and are about the only option homeowners have at this point.

Jeanine then asked George what made her decide to move to St. Cloud, Florida? George replied that it was funny when he was in the building industry because he is such an avid outdoorsman, he had a great place to hunt in St. Cloud.

He continued that St. Cloud is one of those places that is still country and small-town-focused. He said a big part of our life here is the cattlemen and the ranches which is one of the reasons I’m here. I’ve hunted here for a long time and met good friends and built great relationships.

Are You Considering St. Cloud FL As Your New Home?

Jeanine asked how long George has lived in St. Cloud and he answered for 14 years ever since he started Brightway Insurance. She followed up and asked George what he might say to someone who may be considering St. Cloud as their new home? He replied that it is a great place to be and there are some undiscovered places like Harmony which is within St. Cloud.

George told his father-in-law and his uncle when they were thinking of coming here. He said there is a place called Harmony that has an unbelievable golf course and there is wildlife everywhere. It is a community that is built around nature.

Jeanine then asked George what one place he would recommend that people go see when they come to St. Cloud? He immediately replied that the downtown area has become really cool. We have some nice places to eat, some great places to have a drink and of course, there is the lakefront. He said you can always have a great meal at Crabby Bill’s.

George said the one thing that is unreal about my team is their accomplishments. Mark, one of his agents, is the number one Brightway agent in Central Florida and has been for over 10 years. George said he built a support team around Mark. He said his team is very experienced and they know exactly what to do in any situation.

Jeanine asked George to talk about the second business he recently started called Stern Dog Hunts. He said he started a second business in St. Cloud, and it is a quail hunting operation as well as hog hunting. The real theme here is passing on the legacy. What he means by this is one of his goals is to pass on the outdoor situation to the youth in our community.

George said he is raising his kids in the outdoors, and they are doing things that most kids don’t. He said his kids don’t sit at home playing video games or watching T.V. His kids are always outdoors, and athletics is a big piece of this as well. George coaches as well.

George said with Stern Dog Hunts they are not only involved with the youth but also, works with Wounded Warrior Outdoors. They are an unbelievable organization that helps our warriors that were wounded in battle and are missing limbs. He said they take them hunting and we have great experiences. George said he teaches people how to have fun in the outdoors in a very positive way.

We hope you enjoyed Jeanine interviewing George Sterner of Brightway Insurance The Sterner Agency as our featured St. Cloud FL business spotlight. This will continue to be a monthly focus for the Discover St. Cloud Florida podcast.