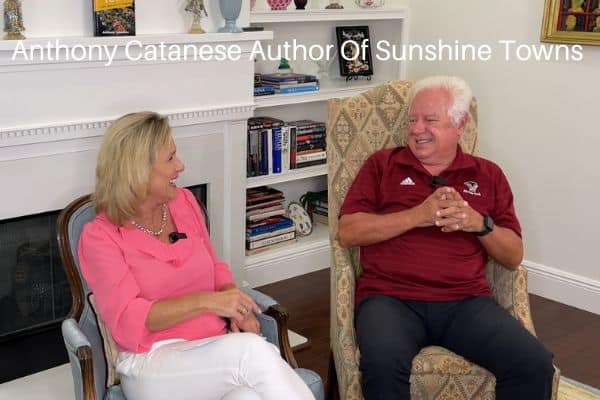 Anthony Catanese is our resident spotlight of St. Cloud FL this month. Jeanine Corcoran broker for The Corcoran Connection interviews Anthony who goes by Tony in this month’s episode. Jeanine is flying solo on this episode as Kristin has been sick and lost her voice. This is the 25th episode of Discover St. Cloud Florida.

Jeanine shared prior to her interview with Tony Catanese that he had quite a sense of humor which she didn’t expect. She also shared that Tony started writing books in 1972. He has written a total of 14 books. The new book he is finishing will be published this fall and will focus on the community of Harmony in St. Cloud Florida.

Jeanine started the interview by asking Tony how long he has been writing? Tony answered that his first book came out in 1972 when he was an assistant professor at Georgia Tech University. He said he has written 14 books and a new one is on the way which should be out this fall of 2022.

Jeanine then asked Tony how he got started in writing? Tony replied that he studied engineering and then he became interested in architecture. He expanded his thinking and got into city planning with how cities are developed and built. He wanted to add to the literature as he was teaching at the time and wanted textbooks for his students and add to the general body of knowledge.

He was then asked by Jeanine where he did city planning? Tony answered that he started out in practice and when he got out of school, he received his doctorate at the University of Wisconsin-Madison and then worked in Hawaii.

Tony joked that he had a tough job in Hawaii having to evaluate all the beaches in Hawaii with all the tourists and resort development. He joked he had a two-year contract, and it took him 5 years. Tony said it is so hard to finish on time. Jeanine commented that she loves his sense of humor.

Tony continued that while Jimmy Carter was President, he worked for the Alaskan Native Claim Settlement Act where several million acres of land in Alaska were distributed to the native populations. Tony was one of his representatives that helped decide which lands would be eligible for distribution. Tony stated that most of his work was as a consultant in Georgia and Florida.

Jeanine asked Tony for those that don’t know him to summarize his career and life for them if he could. Tony started by saying he had one of those lives of unexpected ambitions. He started off as a kid in New Brunswick, New Jersey playing in a rock’n’roll band. Tony said he wanted to be a rock star, but his father has other ideas, so he went to college to study engineering.

Tony continued that he thought he wanted to be an engineer, as civil engineering is great, he was designing bridges, but he thought he needed a little more than that. Then Tony moved on to architecture where he was designing single-family homes. He said he became interested in the larger picture, especially with the way European towns were developing.

Tony said that his family then moved to Ocala, Florida so all the big city stuff went away. He stated his dad was in construction and thought there would be a lot of development in Ocala, and he was right. That is when he became a Floridian.

Jeanine asked him when that was? Tony replied that it was right after he got out of high school so in the mid-1960s. He continued that he spent most of his life in Florida and Georgia. He said he went back to New York for a couple of years and attended Pratt Institute in Brooklyn, New York, and was the provost there.

Jeanine then joked and said she has to leave the interview because clearly, she has not done enough with her life. She said to Tony that he has led a very fulfilling life. Tony stated that his life has been interesting. He joked and said that he still wants to be a rock star.

Jeanine then asked Tony to talk about his last published book named Sunshine Towns. Tony said he wanted to talk about what is called new urbanism development in Florida. He stated that sometimes we get a bad reputation in Florida for development. He continued that we have done something unique in developing this theory of new urbanism in Florida. It is the idea that we can make our towns about 50,000 in population as a maximum.

Tony added that the goal is to develop them on traditional American principles and some Italian design Hilltown principles as well. All the towns would have a central marketplace and be walkable which is the key. He said if you wanted to get a carton of milk, you don’t have to get into your car to go get it. They would have schools that the kids can walk to and in general, the housing style is different but it does have a pattern book so it would have to be certain kinds of housing.

New Urbanists Towns Are Based Upon Traditional American Principles

Conservation would be a key Tony added and the goal is to get as much as possible. A lot of the new urbanist towns would have 60% conservation areas. Tony thought what a unique idea this is, developed in Florida. He added that this started in a little town in the Florida panhandle called Seaside. A man named Robert Davis who had been a significant developer in Miami got this land from his grandfather and he wanted to do something very unique.

This happened around 35 years ago Tony said. Mr. Davis hired two young architects who coincidentally Tony knew and had hired when he was Dean at the University of Miami. These architects were Elizabeth Plater-Zyberk and Andre Stuani. They got into a car and drove all over the South and marked all the things that they liked in traditional American Southern towns. They put them all together in this theory called “New Urbanism” and developed it in Seaside.

Tony shared how he goes to Seaside every year for a family reunion. He said Seaside is great. Tony stated one little problem when they started planning Seaside, it was meant to be a middle-class second-home community they had some very interesting things happen.

Tony shared that a very famous architect named Leon Krier from London built a very nice house there. It became a contest of can you bring the biggest named architect into town. Jeanine then asked him what happened to the prices of homes in Seaside? Tony replied that we were thinking of building homes in the $50K range and soon it went into the $2m - $6M range.

Tony stated what happened next was Leon Krier’s patron was a man named Prince Charles and he made the statement that Seaside Florida was the finest new town in the world. He said, then the world came to Seaside, FL. Tony said that it became a very elite upper-class resort. It is world famous and still developing and ongoing, but it was not what we intended.

Tony then shared that there was another man in Florida who wanted to develop an environmental prototype city of tomorrow. That idea morphed because of business into what became Epcot Theme Park. Walt Disney still wanted to build a prototype city and he liked new urbanism but unfortunately, he passed away before this happened.

Tony shared that Bob Iger, who was president of Disney, and Roy Disney followed up on that model and they tried to incorporate these principles into Celebration, Florida. Again, Tony said, Celebration became much bigger, and more tourist-oriented than was originally intended.

Tony added that an individual developer built Seaside and then a huge corporation built Celebration. When Tony was the President of Florida Atlantic, he got involved in another new town called Abacoa, Florida. So, a new town was built here which included a campus for Florida Atlantic University.

Tony said that several new towns were then developed and one of the most interesting was Windsor, FL. This became kind of an international center for the very wealthy. He added that there are all kinds of grades of housing in these new urbanist towns.

Tony then stated that the one in his view is the “purest” of the new urbanist towns is Harmony, Florida. He said the reason for this is that it follows all the principles of new urbanism. Harmony has achieved a higher level of conservation than some of the other towns and none of the lakes can be developed. Everything is walkable in Harmony. Some things may be a bit of a walk, but you can get to just about everything.

Tony commented on the fascinating aspect of adding in wildlife and nature by Jim & Martha Lentz. He continued that this aspect is somewhat new to the new urbanist movement and Tony thinks it is fascinating. This is one of the few urbanist towns where you can see a herd of deer or where you have to stop your car and let the Cranes pass.

Tony said he believes what is called Harmony Main is the prototype for what new urbanist towns in Florida on new land should be. This is the reason why he is writing, at the request of Jim and Martha Lentz and with the editorial assistance of Jamie Abel and the photography of Sherri Lynn Heck, a book just about Harmony. The title will be Harmony Florida – Living With Nature.

Tony said that his book “Sunshine Towns” covers all the new urbanist towns, but he wanted to do a book on how special and unique Harmony really is. He wants to get high school kids and college kids to understand what new urbanism means and what you can do with Florida land. So, his new book on just the town of Harmony, Florida will be out this fall most likely in November.

Tony shared that there is another developer that owns 300,000 acres of land in Central Florida. They have permission to plan 10 new urbanist towns with 50,000 population in each of them. He said he enjoys working with this group because they understand urbanism, they understand conservation, and they understand living with wildlife and nature.

So, these 10 new towns that they are going to build I think are really related to Harmony and the whole new urbanist movement. Tony said he believes it is going to change the face of Central Florida.

We hope you enjoyed Anthony Catanese author of Sunshine Towns as our resident spotlight of St. Cloud FL. We’ll continue to be your resource for keeping you in the loop on different events, businesses, and real estate happenings in Saint Cloud, Florida!