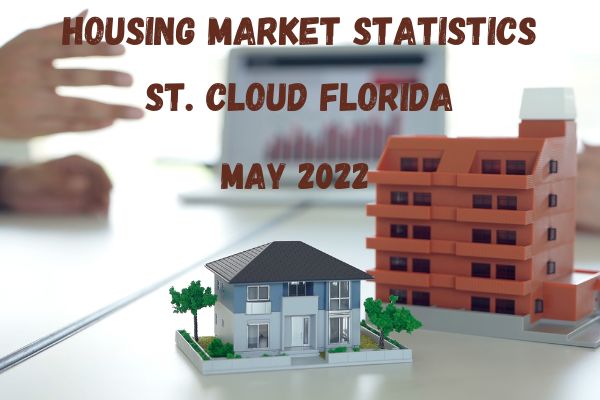 Jeanine Corcoran Reports On The Housing Market Statistics For St. Cloud Florida May 2022

Jeanine is joined by Kristin Macari her co-host. Welcome to the 23rd episode of Discover St. Cloud Florida. They will be discussing what happened in the St. Cloud Florida real estate market last month.

Kristin opened by saying they were going to cover what happened in the St. Cloud real estate market in May 2022. Jeanine started with zip code 34769. There were 43 homes sold in May versus 41 sold in April.

Jeanine and Kristin said that the price per square foot metric is good to know but you really need to compare apples to apples. You want to look at houses that are similar to yours. Jeanine is always available to take a phone call and help you with an accurate price for your house.

What Is The Price Range Of Homes That Are Still Receiving Multiple Offers?

Jeanine continued and said for the homes priced at $475K and up are not seeing multiple offers. She said the time on the market is longer now as the buyer is waiting for that one offer. The more expensive homes do take longer to sell and that is what is happening. She said it is nothing to be afraid of and it is more in line with a traditional real estate market.

Jeanine does feel the market is flattening right now just coming off Memorial Day weekend. It certainly is not a down market, and she feels there is no impending crash coming.

Jeanine said she is seeing a change in the builder’s behavior. She was saying that whatever the builders are seeing, she sees it about 3-4 weeks later. She said builders were in the driver’s seat and took the position of “send your buyer in and put in your best offer” and now that is changed.

Today Jeanine is getting emails from the builders, and they are saying we have these inventory homes, and they are ready to move in and we’ll pay closing costs and will even throw in a bonus. The builders have been busy trying to keep up with the market craze over the last two years and now things are shifting.

Jeanine mentioned that some buyers have pulled away from buying a house because the interest rates have gone up. Kristin added that the market has slowed but, in her opinion, does not see anything kind of crash on the horizon.

Jeanine’s opinion is that if a buyer is going to get a deal it is going to be somewhere between Thanksgiving and the end of the year. She added that this does not apply to the 55 and older crowd. People who have to move during that window of time are pressed to get out and there are deals to be had.

Kristin agreed with Jeanine on the best time to buy a house if it works out is between Thanksgiving and the end of the year. That is exactly what she did. She and her husband got lucky and met with a builder where one of their deals fell through and a home was available. It ended up being perfect for Kristin and her family.

Have You Had Your Private Mortgage Insurance (PMI) Removed From Yor Mortgage?

Jeanine then moved on to PMI insurance. Homeowners who had put down less than 20% are required to add PMI insurance. The real estate market craze over the last 18-24 months has afforded many homeowners a lot of equity in their homes. Jeanine stated, that with that increased equity, you can have your PMI insurance removed and enjoy those savings each month.

Jeanine said if anyone needs help with having PMI insurance removed from your mortgage, reach out to us, we’d be happy to help you. If you bought your home through another realtor, now is the time to get in touch with them and have them help you remove the PMI.

There was one huge vacant land sale in May for 397 acres which sold for $16M and it was a cash deal. Out of the 22 parcels sold in May, only 3 of them were conventional loans. All of the others were cash deals.

Speaking of acreage, Jeanine mentioned that there is a fantastic property for sale at 1439 Simmons Road Kissimmee FL 34744. This property has over 5.5 acres of land. It is a beautiful custom home. This is a peaceful piece of paradise tucked away from the hustle and bustle but conveniently located to shopping and major highways. If this sounds interesting to you, you can view the property walkthrough video here.

We hope you enjoyed Jeanine and Kristin walking you through the housing market report for St. Cloud FL April 2022. We want to keep you up to date with what is happening in the real estate market in St. Cloud so you can make informed decisions when it comes to your real estate needs.