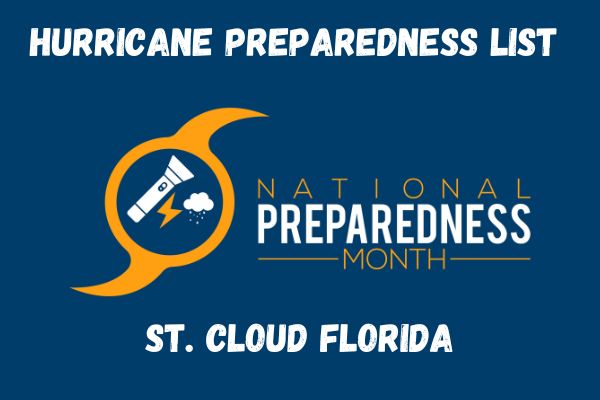 Jeanine is the broker for The Corcoran Connection and is joined by her co-host Kristin Macari owner of Studio Nine 13. This is their 22nd episode of Discover St. Cloud Florida. Jeanine and Kristin wanted to focus this podcast on hurricane preparedness being that the hurricane season just started on June 1st.

Kristin said the first hurricane of 2022 has been given the name “Alex”. They name the hurricanes, Jeanine stated, in alphabetical order as they develop through the hurricane season.

The state of Florida has had an influx of people moving into the state and these transplants aren’t familiar with what you should have on hand and the prep that needs to be done going into hurricane season. Both Jeanine and Kristin wanted to provide some of their own tips learned from personal experience to keep people safe.

The disaster websites in Florida have lists and kits that include all the things one needs to be included in their hurricane preparedness kit. The FloridaDisaster.org website is for residents of Florida, and they have a hurricane checklist for the storm season.

Jeanine has lived in the state of Florida since 1987 and can talk from personal experience when it comes to hurricanes. The schools of Central Florida typically have no school when a hurricane day is anticipated. Those days usually wind up being beautiful and people make a beach day out of it. Jeanine stated this has been her experience since 1987.

First on their list given by Kristin is medications. Make sure if you are taking medications, you have at least 2 weeks’ worth on hand. If you have medical devices, make sure they are in good working order and have extra batteries on hand for those devices. You need to have several flashlights as well so you can see in the dark. Bottled water is of course a must as well as a weather radio so you can hear what is happening.

When there is an active hurricane, your mobile phones won’t work as the cell towers are down Jeanine added. Another category on your list Kristin said is all your pet stuff. Have all that ready to go in the event of a hurricane and all the stores are closed for a time.

The hurricanes that hit in 2004 left Jeanine and Kristin without power for several weeks. There were a lot of cold showers taken during that time and it was not fun. Being on city water during that time saved them because if they were on a well and the power went out, they would have no water.

What Were The Names Of Those Four Hurricanes From 2004?

Kristin was asked by Jeanine if she could recall the names of those four hurricanes from 2004. Kristin said hurricane Charlie was the first one that hit. Jeanine commented that Charlie, a category 4 hurricane, was the most destructive of the four hurricanes.

It knocked down trees everywhere. Kristin added that they didn’t think it would get to them in Central Florida, so they were not prepared. Usually, the storm scares end up being just a lot of rain.

Hurricane Francis followed Charlie Kristin said and we were still without power. Then Hurricane Ivan targeted the panhandle area and hurricane Jean was the final one. Kristin stated that 2004 was a rough year for all of us in Central Florida. We had to deal with power loss and property damage and these four hurricanes left their mark on people many of whom suffered from anxiety for a few years after the fact.

Jeanine stated that they learned a lot from what they went through back in 2004 which was tough to get over. Jeanine learned that hurricane shutters weren’t for her. They would leave you in the dark while having no power and no air. That didn’t sit right with her.

Jeanine came up with a plan after they experienced their first hurricane in 2004. Having a hammer is a staple in every home but in addition, what she learned was to have heavy-duty tarps and nails. If you’re waiting until right before the hurricane hits to go buy these items what, you’ll find is they are already sold out.

Most people in preparation for a hurricane or bad storm will duct tape their windows. The problem with this in Florida is the heat. You’ll spend the next few years trying to get the tape off them. In place of the duct tape use heavy-duty shower curtains.

If the windows were to shatter with duct tape on them, the glass will be contained. Using staples with the heavy-duty shower curtains accomplishes the same thing. No need to worry about how long it will take you to get the melted tape off your windows.

Let’s now transition from the preparedness part to the comfort part Kristin said. Kristin was 6 months pregnant back in 2004 when those four hurricanes hit. It happened to be in the middle of the summer, and it was hot. Having cash was a major lesson learned back then because when the power is out, credit cards can’t be processed. Cash is needed to buy the things needed during a storm.

If you are a coffee drinker another lesson learned is to have instant coffee on hand as well or you will have to go without. When the power goes out, the normal routine goes out the window so being prepared is essential.

The hurricane season starts on June 1st and goes to November 30th   Jeanine stated. She added that the hurricanes only happen during the hot months in Florida. Now is the time to prepare so you don’t stress or panic when a hurricane is on its way. Prepare and check off all the essential things on your list.

We hope you enjoyed us walking you through our hurricane preparedness list we put together for St. Cloud Florida residents. If there are other topics you would like us to cover regarding Saint Cloud, please comment below the video and we will do our best to cover it on one of our upcoming podcasts.