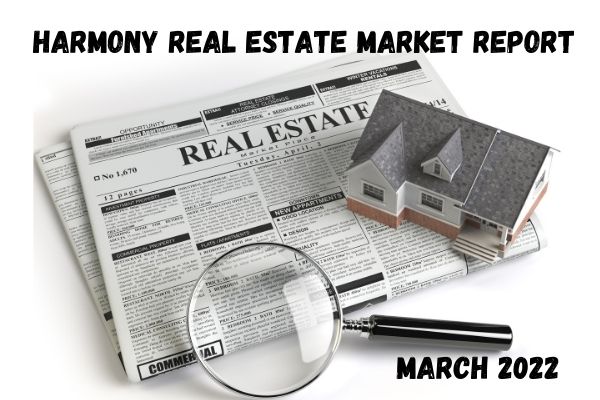 Jeanine is the broker for The Corcoran Connection a real estate company. She is joined by her co-host Kristin Macari owner of Studio Nine 13. Welcome to the 17th episode of Discover Harmony Florida and today’s focus is a recap of the real estate market report for March 2022.

Kristin asked Jeanine what happened in the Harmony FL real estate market in March 2022. Jeanine said the first thing she noticed in The Enclave which is a new community in Harmony is the sales are not showing up. Jeanine’s one sale in The Enclave for February did show up but there have been at least 3 more and they have not been reported so there are no stats on those sales.

Jeanine stated right now in Harmony there are 9 actives and 66 pending sales. This does not include new builds. Ashley Park has the condos and townhouses and there were 3 sold in March. The price per square foot was $151.52. She noted that the prices in Ashley Park are rising, and they are catching up to the rest of the market.

Jeanine said that in April and May there should be a lot more listings being added to the market. This is a good thing as she has a lot of buyers who are patiently waiting. She then moved on to the sales in The Lakes in Harmony which represent South Lake and East Lake. She said there were 4 sales for March. The price per square foot was $210.78.

Harmony West had two sales in March Jeanine said and their price per square foot was $206.85. She said to be on the lookout for more homes coming on the market as she has 3 herself and another from one of her agents.

Jeanine asked Kristin to tell everyone about the CTC she received. Kristin said there are three magic words a buyer wants to hear and that is we are “clear to close” or CTC. She said she and her husband are clear to close on their home in The Enclave in Harmony.

She said it has been a fun experience to go through. First, they were waiting on windows and those came in, and then it was a second A/C unit for the 2nd story that just arrived recently. There are other little things missing but she is not worried about those. The one important thing still missing is the internet and cable!

Jeanine and Kristin were talking about the challenges of moving into a brand new community. Jeanine helped Don and Rachael close on their home in February and become the first residents of The Enclave in Harmony Florida. However, sometimes being first isn’t all that it is cracked up to be.

Don and Rachael have become guinea pigs of sorts as they are working through all the bugs of being the first residents. First, they didn’t receive any remotes for entering the gated community, they had to use a code to get in. Then, they received only one remote and were told they had to pay $50 for the second remote. Both Jeanine and Kristin thought this was ridiculous. Kristin just learned of this and said she is going to get that charged for her home.

Next Don and Rachael were not receiving any mail. They went to the post office and fixed that problem themselves. Thirdly, they are still without the internet and cable which is terrible. There were also no street lights for some time. Those were just recently installed. There has also been no garbage pickup as the garbage trucks can’t make it through there because of all the construction trucks.

The First Block Party For The Enclave At Harmony Florida

Kristin said she loves her neighbors and hopes by the time she and her family move in, all these issues will be worked out. Their family business relies on the internet so that has to be resolved before they move in. Despite all of these challenges she is very excited to move in and is already organizing a memorial day block party.

We hope you enjoyed Jeanine and Kristin walking you through the Harmony FL real estate market report for March 2022. We want to keep you up to date with what is happening in the real estate market in Harmony so you can use this information to make an informed decision regarding your real estate needs. View the source video here.