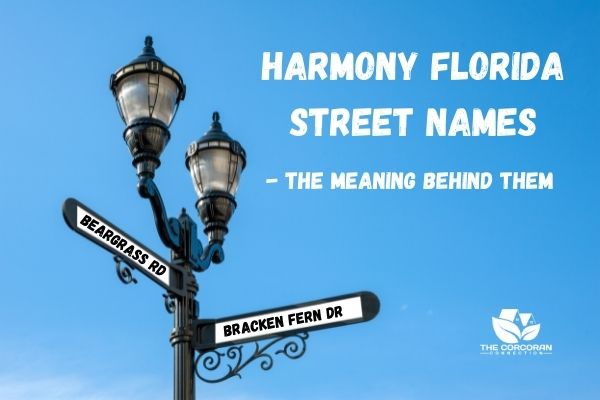 Jeanine Corcoran, broker for The Corcoran Connection a real estate company reviews the history of the community she lives in and how it was developed as it relates to the Harmony Florida street names. A lot of thought was put into this community by the developers, Jim, and Martha Lentz.

Jeanine was joined by Kristin Macari owner of Studio Nine 13 as co-host. This episode will center around the origin and history of street names in Harmony. View source video.

Jeanine started by saying that a lot of the Harmony street names were named after plants and bushes. The origins of street names come from what Kristin called “historic Harmony” and was well thought out by the original developers.

Jeanine continued that Jim and Martha put a lot of thought into the Harmony Community and did a lot of research and developed a wonderful place to live. Let’s start with the plant called Britton’s Beargrass known as Nolina Brittoniana. Beargrass Road is one of the original streets in Harmony, FL.

This plant occurs only in scrub and other dry habitats in six Central Florida counties including Osceola County. It is listed as an endangered species. Kristin asked Jeanine if the developers went so far as to plant Beargrass on the actual street. Kristin looked it up while on the podcast and sure enough, it looks like they did! Pretty cool.

Kristin lives on Cupseed Lane in Harmony and the cup seed plant is a high climbing vine that grows in wetlands and wet woodlands. They can grow up to 40 feet long and although the leaves resemble the leaves of grapes, the stems do not have tendrils for clinging like grapevines. The seeds are black and up to an inch long and they are scooped out in the form of a cup.

Kristin then went and googled another street in Harmony named Cordgrass Place. Sure enough, there is a plant named cordgrass. Another street named Sundrop is also a plant as well as Sagebrush Street named after the sagebrush plant.

Jeanine and Kristin shared that the developers really did do well in keeping with the nature theme which is what Harmony is all about. We hope you enjoyed the 10th episode reviewing Harmony Florida street names and their origin.

Our goal at The Corcoran Connection is to keep you up to date with the amazing events and places to visit and enjoy in Harmony. If you want to learn more about this wonderful community, visit our Harmony page on our website or reach out to us directly.